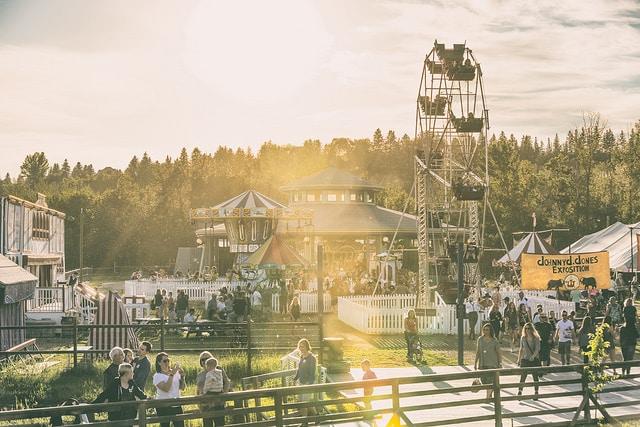 If you're a history buff, you'll find a number of fascinating and
historical sites throughout Edmonton, Alberta. Check out some of these places
to learn more about the area.

At the Chapelle du Père Lacombe, or Father Lacombe Chapel, is the oldest building that is still
standing in the province of Alberta. Father Albert Lacombe built the chapel in
1861 as the center of the Mètis settlement, which included the descendants of
Aboriginal peoples and European fur traders. The culture of the Mètis people
combines Euro-Canadian and Aboriginal values and forms of expression, creating
a unique blend of the major groups.

As you walk through the historic log chapel, you'll feel like
you've stepped back in time to the 17th century. The grounds also include the
cemetery and crypt, where the remains of early residents and Father Lacombe are
buried. You can also take a tour, led by an interpretative guide, or
participate in the educational programs and special events that take place at
this location throughout the year.

Fort Edmonton Park is a fascinating living history museum located on 143 Street. At
this park, you can watch entertaining shows or take part in historical events.
Its name comes from the first European post in the area that is now Edmonton.
Across the grounds, you'll see historical and rebuilt structures that help you
get a sense of the early days of Edmonton, including when it was mainly
inhabited by Aboriginals. During the summer months, historical interpreters
dressed in authentic costumes staff the park, giving guided tours and
presentations that create a more authentic atmosphere.

Another popular sight to see is the High Level Bridge Streetcar,
which allows you take a ride and experience what life might have been like in
the early days of the city. Along the way, you'll go through the historic Old
Strathcona area, as well as through the only CPR tunnel found on the east side
of the Canadian Rockies. The tour also includes a ride across the High Level
Bridge, which takes you into downtown.

Alberta Government House, located just 7 kilometres from Crosstown Chrysler Jeep Dodge, is another top historic attraction in the city. When
it was built in 1913, the purpose was to house the lieutenant governors of
Alberta. Over the years, economic situations forced it to close. An airline
leased the structure but maintained much of its historic charm and
beauty.

Later, the historic structure became a hospital and home for
veterans, a government conference center, and reception space. Prior to it
reopening as the conference center, it underwent some renovations and
refurbishments. The building's three stories include a number of conference
rooms, some of which are named for six of the past lieutenant governors who
lived in the house in its early years.

With historical destinations that are fun and educational located
throughout the city of Edmonton, there is always something to do and see.
Explore these sites and enjoy learning more about the heritage. Make sure to take that new vehicle you recently purchased at Crosstown Chrysler Jeep Dodge for a drive to one of these fun Edmonton historical sites.

"Fort Edmonton Park" by IQRemix, used under CC BY