5 of Alberta's Most Outlandish Roadside Attractions

5 of Alberta's Most Outlandish Roadside Attractions 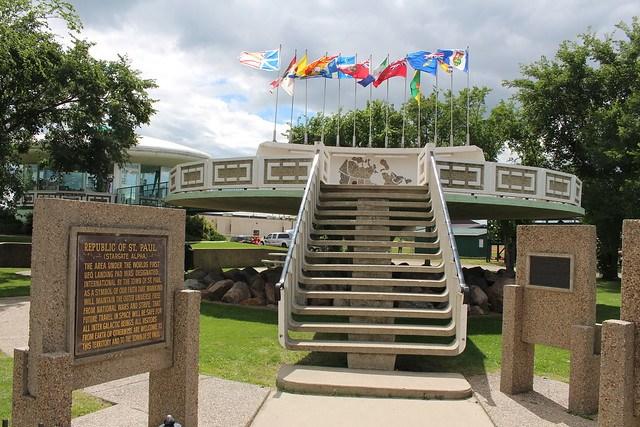 Whether you're a local or just passing through, there's certainly no
shortage of interesting landmarks to explore in Alberta, Canada. Here are
just five roadside attractions worth visiting.

Known as the "Dinosaur Capital of the World," Drumheller offers up
an exciting exhibit for the whole family to enjoy — the world's largest
dinosaur. This massive T-Rex weighs 145,000 pounds and is 86 feet
tall and 151 feet long — 4.5 times the size of a real T-Rex. It was
constructed in 2001 and cost over $1 million to build. It also features 106
stairs, which lead to the dinosaur's mouth and a stunning view of the
city.

Originally built in Calgary for the 1988 Winter Olympics, the Saamis Teepee
was later moved to Medicine Hat in 1991, taking less than a week to reassemble.
Made entirely of steel, this structure requires 960 bolts to handle a weight of
800 metric tons as well as a 215-foot height and 160-foot diameter. Tourists
won't only notice its impressive size — they'll also marvel at the 10 large,
adorning storyboards showcasing the country's native culture and history. Plus,
visitors can explore the adjacent Saamis Archaeological Site, which features a
self-guided tour around the area reported to have 83 million buried
artifacts.

This odd attraction is a tribute to Stawnichy's Meat Processing, a
family-run factory known for having the best Ukranian sausage in the country.
So, how did Mundare show its appreciation for the shop? By building a massive
42-foot tall, 12,000-pound kielbasa sausage, of course! It's made entirely of
fiberglass and took $120,000 and four years to build. It's also surrounded by
four flags representing the Stawnichy brand, Mundare, Alberta, and Canada.
Accompanied by a rest area, this sight is an interesting destination for
tourists.

St. Paul is home to a rather outlandish landmark — the world's first UFO Landing
Pad. It was constructed in 1967 by order of the Canadian government. Thus,
St. Paul was dubbed the "Centennial Capital of Canada." Today, guests
can partake in some family-friendly fun with the alien cutouts ideal for
snapping photos with, or they can visit the adjoining UFO Data Center, which
features some educational exhibits showcasing authentic photos and reports of
extraterrestrial phenomena.

Recognized worldwide and known as a tourist hot spot, this pysanka,
or Ukranian-style Easter egg, is 31 feet tall, 25.7 feet long, and 18
feet wide, and weighs an impressive 3,000 pounds. Its construction in
Vegreville was centered on honoring the Royal Canadian Mounted Police and
represents a commitment to peace and vitality. It's a truly stunning display of
creative and engineering brilliance, as it comes adorned with 3,512 facets,
2,208 equilateral triangles, and 524 star patterns. Oh, and it rotates with the
wind!

This structure is so renowned that even Queen Elizabeth and Prince Philip
had to see it up close. An official plaque is situated in the area to
commemorate their visit.

With so many unique destinations to discover around Alberta, which attraction
will you visit first?

"St. Paul, Alberta" by RPAP Communications, used under CC BY