4 Inspirational Jeeps and Their Owners

4 Inspirational Jeeps and Their Owners 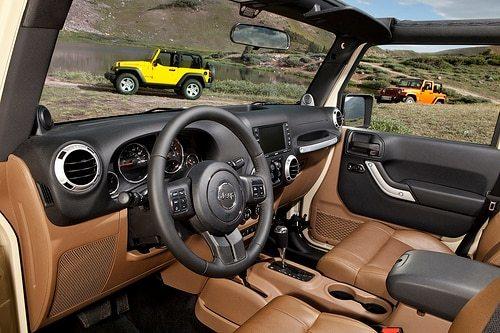 There's something unique and enthralling about Jeep, something that makes
fans passionate enough to show their love in fascinating ways. Maybe it's the
adventurous nature of the brand or the models that take people wherever they
want to go. These are some of the coolest Jeep owners we know and some of the
awesome things they've done with their favorite models.

Amy Lerner epitomizes competitive off-roading. She formed a team for Jeep
rallies and competes in her Jeep JK Wrangler Unlimited, a special extended
version of the 2007 Jeep Wrangler. She has won awards in events like the 2012
Rallye Aïcha des Gazelles, a prestigious female-only rally in Morocco.
Specifically, she won the Logica Challenge prize, given to the driver who
performs the best in a fuel-efficient vehicle.

Awards at events like this are just a sample of Jeep Team Lerner's
achievements, and her honors reveal as much about the potential of a Jeep
as they do about her own team's finely honed skills.

This is an inspirational assembly of Jeeps rather than a single model.
In 2011 the Bantam Jeep Festival was held for the first time, with
over 35,000 people attending the show. Jeeps organized by decade traveled in a
single lane through a three-mile parade, ending at Butler's Main Street. A
grand total of 1,106 Jeeps participated, which set a Guinness World
Record for the longest Jeep Parade. We salute the many Jeep lovers who got
together to claim this record.

In 2007, two Jeep Wrangler Unlimited models made it to the top of the second
highest mountain in the western hemisphere, and the tallest volcano in the
world, Ojos del Salado in Chile. The climb to the volcano's rim was 6,646
meters, or 21,804 feet, a Guinness world record for the highest a Jeep climb up
a mountain.

It took five days for Mattias Jeschke and his team to go from the base
of the mountain to the very apex. Since no one is driving a Jeep Wrangler to
the top of Mount Everest anytime soon, we're guessing that this record is here
to stay for a long time.

The Jeep That Went
Around The World

Frederick Benjamin (Ben) Carlin is the only man to circumnavigate the entire
globe in an amphibious Jeep, which he constructed and named Half-Safe. His wife
Edna stayed with him for much of the journey. In total, it took eight years and
a story fraught with drama, tragedy, and finally, triumph. Carlin went through
a variety of complications and obstacles, from frequent breakdowns to
hallucinations. The journey was 62,744 km (38,987 miles) overland and
17,780 km (11,047 miles) by sea.

Have these four stories inspired you to get a Jeep? We at Crosstown Chrysler Jeep Dodge are ready to answer any questions, schedule test drives, and search out
the model you're after. Remember, if you have an interesting story about your
own Jeep or someone you know who drives one, feel free to let us know!

"2011 Jeep Wrangler Interior" by AlBargan, used under CC BY