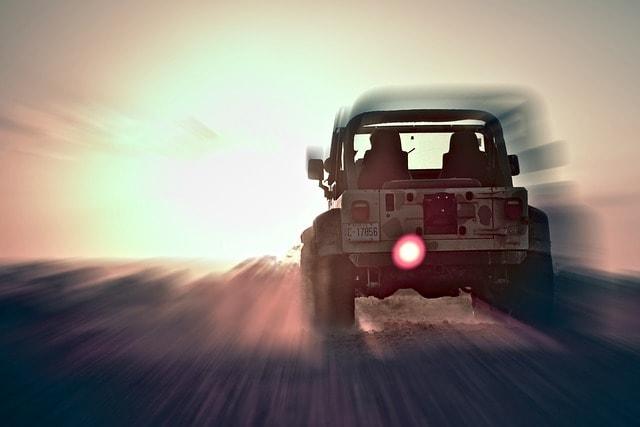 While it retains some of the tried, tested and much-loved aspects
of the classic Wrangler, such as the windshield that still folds flat, there
are a lot of new features in the 2018 Jeep Wrangler. The new model seamlessly blends modern
technology with the iconic motor we all know and love.

Here's a rundown of all the best new features:

One of the greatest new features of the 2018 Wrangler is a fix to
a source of major frustration in the form of a soft top that's effortless to
use. With a simple adjustment, you can now fold the roof down, making it
considerably more versatile than its predecessors. Choose between having it
completely down, leaving the rear window in, or the rear quarter in; it's
entirely up to you and the weather.

To make the roof even easier to operate, Jeep has included a Sky
One-Touch power-top, an electronically operated and full-length canvas roof
that slides away with one push of a button, taking only 90 seconds. This option
is available on the Rubicon and Sahara models only, allowing for the removal of
rear quarter windows for an almost completely open-air experience.
If you prefer a hard top, there is an optional Freedom Top consisting of a
three-piece setup that allows various configurations.

The two-door model of the Wrangler has an extra inch in the
wheelbase plus an additional two and a half inches of length, while the
four-door is 3.5 inches longer with an extra 2.5 inches in the wheelbase.
Despite this, the turning circle on both is still nice and tight, with the
two-door's turning radius a tenth of its predecessor's, while the four-door's
remains unchanged despite the additional length.

In addition to the extra length, there is higher ground clearance
on the new model, with the Sports trim offering 9.7 inches of clearance, while
the Sahara has a full 10 inches, and the Rubicon boasts 10.8 inches.

The higher-compression of the Pentastar V-6 engine offers
increased fuel economy as well as a stop/start system as standard. The
eight-speed automatic transmission aids the engine in achieving 18 mpg in the
city and 23 mpg on highways.

The Jeep's hybrid system for the Wrangler sees the replacement of
the alternator with a new motor/generator unit, capable of boosting torque
during acceleration. In addition, it's capable of gathering energy through a
new regenerative braking system. The engine can be shut off if the car is
stationary as well as when it's coasting. The new engine in the 2018 Wrangler
comes with Electric Assist and a lot of great tech, including a
variable-displacement 2-stage oil pump, direct injection, and a low-inertia
turbocharger, which is directly mounted to the cylinder head.

Overall, if you're a fan of the Jeep, you won't be disappointed by
the new Wrangler, which has the same rebellious streak and quirky character
we've come to know and love, with a lot of highly modern upgrades.