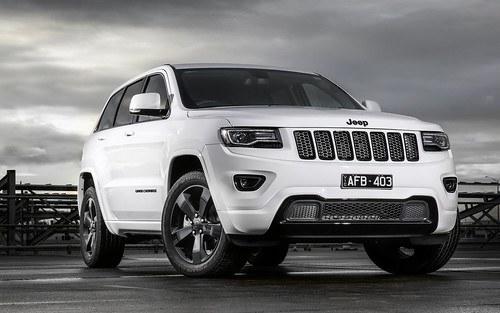 The all-new 2017 Jeep Grand Cherokee takes the stellar reputation of the
brand and adds even more intrigue and opulence this year. One of the most
intriguing parts of this year's lineup includes the addition of the Trailhawk
trim, which bolsters an already impressive off-roading vehicle. Plus, new
options put the Grand Cherokee's interior amenities on par with the big boys in
the luxury market, giving drivers a choice between off-roading prowess,
high-end features, or a combination of the two. No matter what your tastes, the
2017 Jeep Grand Cherokee is sure to deliver. Here's a bit more about all it has
to offer.

While the Grand Cherokee gets some minor updates across all trims for 2017,
nothing is quite as exciting as the inclusion of the Trailhawk model. This is Jeep's true off-roading machine in
the Grand Cherokee realm, providing a bevy of options that make it a monster on
all terrain. It starts with hill ascent and descent controls, an electronic
limited-slip rear differential, skid plates, an air suspension, Quadra-Drive II
four-wheel drive, and it's topped off with Kevlar reinforced tires that ensure
you'll almost never get a flat.

Throw in some black leather on the inside, red accents, and standard 18-inch
aluminum wheels, and the Trailhawk is certainly a force in the mid-sized SUV
market.

This year, the Jeep Grand Cherokee ups the ante by providing even more
powertrain options. All trims except the SRT come with a standard Pentastar
3.6-liter V6 engine that provides 295 horsepower and up to 260 pound-feet of
torque. Aside from the base model Laredo and the SRT, you'll have two available
upgrades if you want a bit more power or efficiency.

The first is an ultra-efficient 240-horsepower, 3.0-liter turbo-diesel V6
that provides 420 pound-feet of torque, making it easier to get over boulders
and other rocky terrain. If you want more power overall, opt for the 5.7-liter
Hemi V8, which pumps out 360 horsepower. The SRT comes in a class all its own
with a brawny, robust 475-horsepower 6.4-liter V8 engine. However, it doesn't
matter which one of these you choose; all have enough power to get you to your
destination with no problem.

Once you hop in the driver's seat of the Grand Cherokee, you're mesmerized
by how spacious the cabin is. It comfortably seats up to five adults, yet if
you need the cargo space, the seats fold down to reveal a whopping 68 cubic
feet of cargo space. Even if you have a packed house, there's still plenty of
space with 36 cubic feet in the rear.

To make the Grand Cherokee even more enticing, Jeep crammed it with extra
features. One of the best is an 8.4-inch touch-screen display that allows you
to control the Uconnect infotainment system, navigation, and apps. There's also
an optional Wi-Fi plan so you're always connected no matter where you're
headed.

In its 24th year on the American automotive scene, the Grand Cherokee looks
every bit the part of the most impressive release from Jeep in a few years.
You'll just have to try one for yourself to make sure.